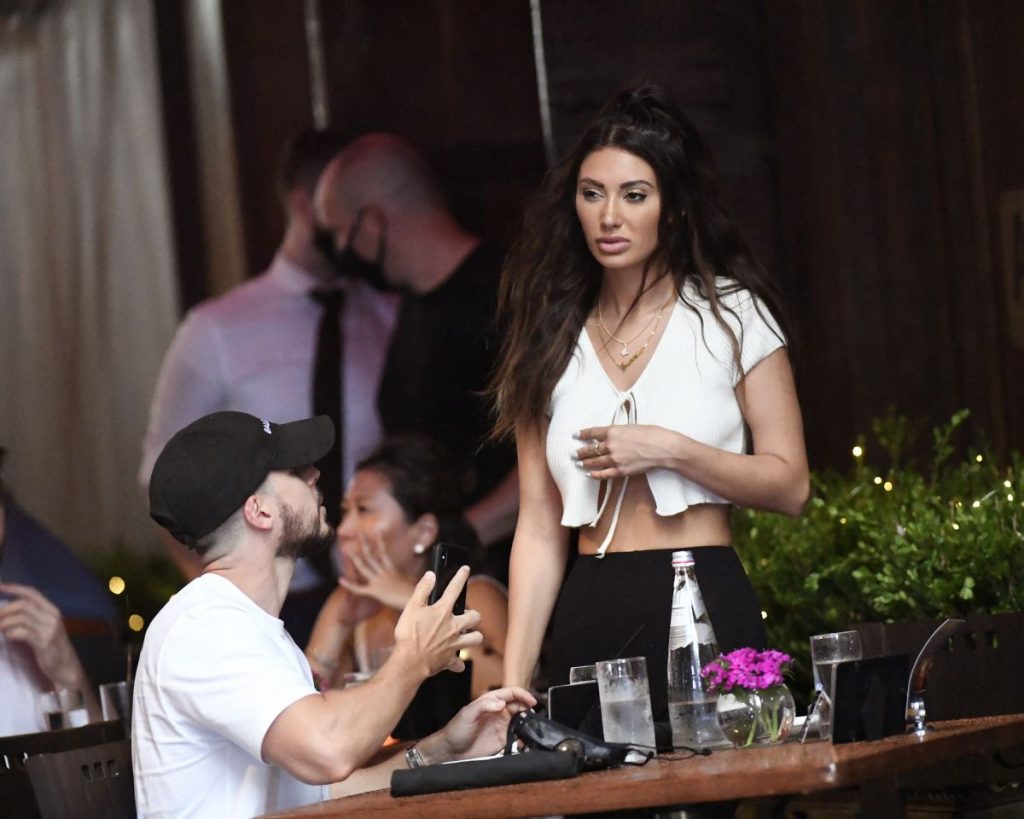 Nowadays Vinny Guadagnino is thought to be taking his role in MTV double shot at love very seriously. It is because rumors are he is dating Francesca Farago, the beautiful actress from Too Hot to Handle. Recently both of them have been spotted together, a band in hand, and talking cheerfully.

Some journalists took pictures and one of them got posted in Daily Mail. In that picture, Guadagnino and Farago are looking at each other with affection and it looks like they are enjoying each other’s company. In another picture, it can clearly be seen that both of them are giggling over something while looking at Vinny’s mobile phone.

Dress up for dating

We all know most of the celebrities really know how to dress and make any event extraordinary. But for the date night of Farago and Guadagnino, he chose to be simple. Vinny wore a plain white shirt and a baseball cap, which gave him a casual look. However, Miss Farago looked totally glammed up in her off white colored crop top along with high waisted pants and some amount of gold jewelry. However, both of them looked stunning but the thing that made them stand out was their happiness which was clearly visible on their faces.

For most of the people, Guadagnino dating Farago didn’t come as a shock. A lot of people have mentioned that they were caught flirting with each other on Instagram posts so they did have an idea that something was going on between them. Most of the time they were casually commenting and flirting with each other like in one picture of Farago in which she’s wearing a bikini, Guadagnino complimented her body. There were some more comments like this that let all the public know that either they were both together or will be dating in the near future.

The ex-boyfriend of Francesca Farago openly stated that they are not together anymore he further said that things didn’t work out between them because he had to move and their relationship became long distance. We all know how hard long-distance relationships are and that’s when it got messy for both of them and they decided to part ways.

Farago said that she was really in love with her ex but what can she say when he was the one who decided to part ways. But as there is no point in holding onto something that is not yours anymore so it is best that you try to move on. And that’s exactly what Fargo did. When she saw Guadagnino for the first time, she knew that there was some sort of spark between them. She also mentioned that she had a feeling that if things went fine, they both would stay together for a long time because of their amazing chemistry. In May 2020, Harry had proposed Miss Francesca over Zoom. It was during a special reunion of Too Hot to Handle and then showed her a ring pop instead of a beautiful big diamond ring. Once the production of the show was over, both of them went their separate ways because of the breakup.

Casual flirtingDress up for dating
Previous ArticleGigi Hadid Craves One Thing & One Thing Only – Pasta!