This is obviously not a traditional way to celebrate engagement, but now there’s rumors going on that Kimmie actually had an affair with Kris’s friend the night AFTER they got engaged!!!

Andrey C Hicks used to be one of Kris’s best friends, and then he met Kim Kardashian! Anyways, he  was a very close friend from the family, he even enjoyed a Monaco trip with Kris and Kim… and actually that’s when the whole CHEATING scandal happened!

After that Andrey was convicted for a wire fraud and had to serve 40 monts in prison for a scheme that costed Kris hundreds of thousands! But now Hicks has revealed that Kim and Kris were having an argument even before starting the Monaco trip.

The part of the group for that trip went on for dinner one night and another group witnessed the newly engaged couple get in to a bad fight! After an awkward dinner suppousedly Kris went back to his villa while Kim  and Kris’s sister hung out with Sergei Brinn and Richard Branson on a yatch, while Andrey went out for a bit of casino with his girlfriend in Monte Carlo.

But by the end of the night when a car service went on to pick up everyone Kim wasn’t ready to turn in and Andrey said she asked him to stay with her to “talk” while everyone went to bed… and so he did! They stood and talk about both of their relationships. Hicks said:

“She then went on into how she thought I was a really good guy and how I deserved to be with a woman who could appreciate that. After a tense pause she added that she wished she had a guy like me. I didn’t really know what to say or do but before I could figure anything out she grabbed my hand and came in close. I hesitated for a minute. Everything was running through my head at a million miles an hour. I’m not exactly a good human being, I came to terms with that long before prison came along, but I’d like to think I was above hooking up with my friends new fiance. Well, I wasn’t. So, I did what any warm blooded man would do when he’s got Kim Kardashian pressed up against him. I went for it. We started making out at first, made our way to a more secluded part of the villa’s grounds, and then my pants were down and I was going to town. It didn’t last that long. It was good for what it was. I was half terrified the whole time that Kris would come out with a kitchen knife or something. Afterwards she did the whole, “do I have sex hair?” thing and then we made our way inside the villa. The next few days were awkward.”

DID I JUST READ THAT! Yes you did! No wonder their marriage ended up! But of course there is a doubt in Andrey’s declaration, someone convicted of fraud could do anything to get some attention! BUT! Hold ya’ horses rite’ there!

WE HAVE EVIDENCE!! Taken from Mr. Perez Hilton’s website we have this jewel: 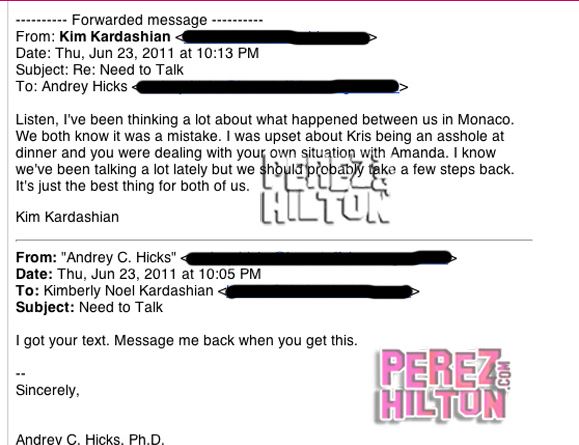 The image provided by Andrey himself really kinda sounds like something went on … or down?

That email certainly doesn’t help Kim Kardashian much when it comes the moment of denial! But we have also to acknowledge that it doesn’t implies sex either… so truth or bird’s talk we’ll have it for you!

Andrey C Hickcelebrity rumorcheating celebritieskim kardashianRichard BransonSergei Brinn
Previous ArticleMoby and Miley Cyrus get together to make the trippiest video known so far!Next ArticleMichelle Rodriguez and Zac Efron heat up the rumors even MORE!!! Check out the HOT details here!