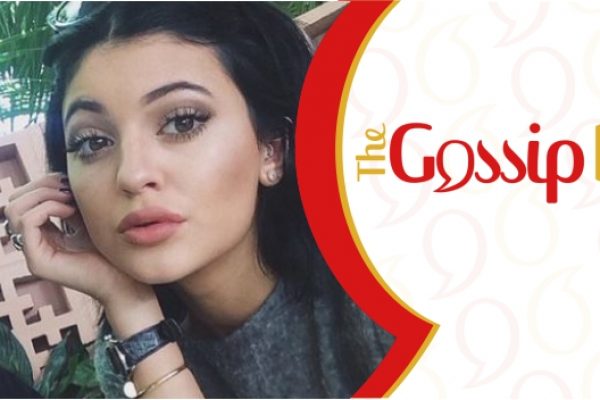 Kylie Jenner seems to be very flaunty’ on her social media, posting her pumped up lips. Yesterday she posted an image of her and a friend that actually look quite strange in the right corner of her upper lip, experts say those are injection track marks. 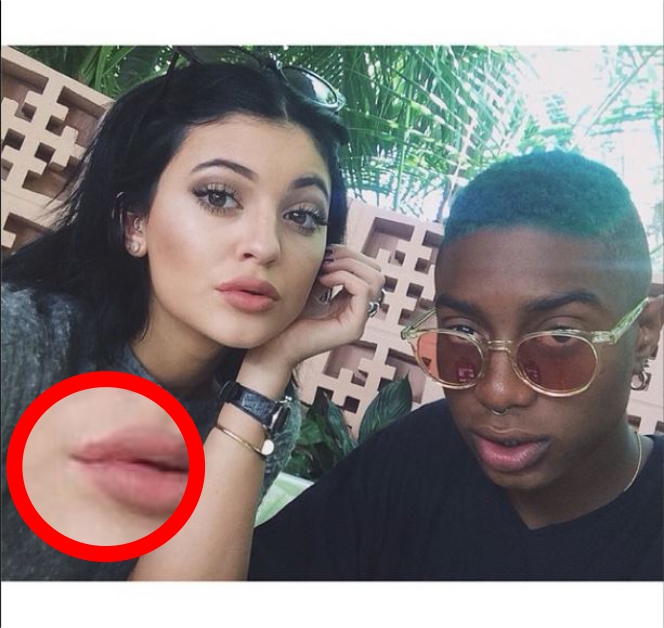 We are not really sure, it could be anything, a love bite, a pimple, she’s a teen it could be anything! But we do have to say that if we compare past images from Kylie and now there’s an obvious change in her lips, they seem fuller now. This is crazy!! since Jenner is only 16 years old,  we hope she just got a super awesome make up artist and not just surgery!

We will let you be the judge: 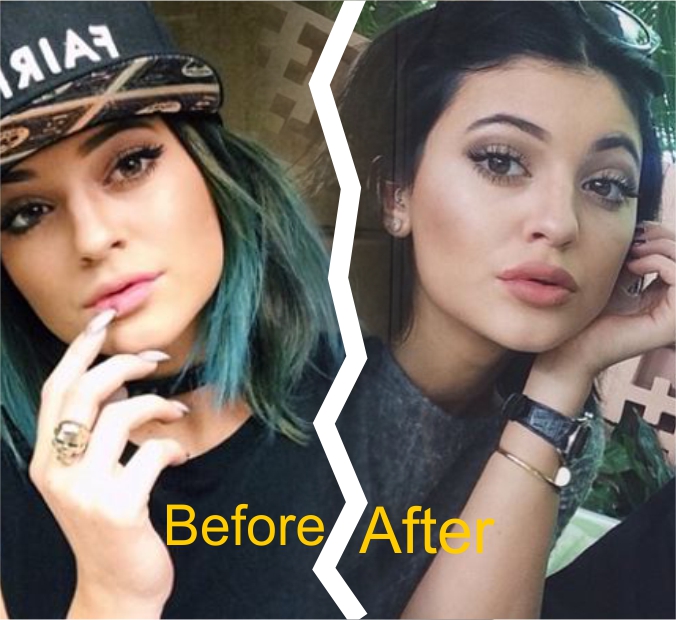 Tell us what you think… Is this surgery or make up? Tell us more Via Twitter or Facebook! 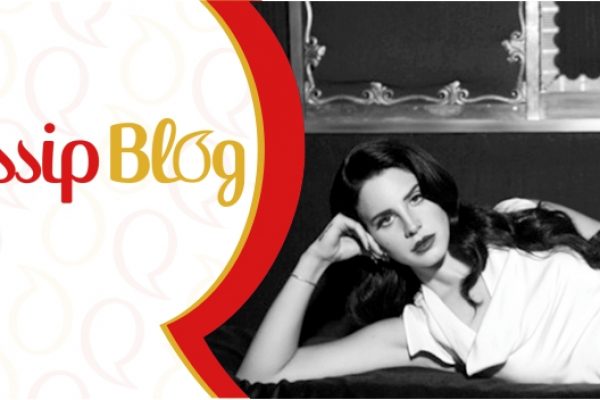 VERY well done Frances!  It happens that Lana del Rey made some Strange out of context comments about her being dead in an interview with the Guardian last week, were she said she wished she was dead:

and when the interviewer asked her if all this  meant the music? she said:

“Everything. That’s just how I feel. If it wasn’t that way, then I wouldn’t say it. I would be scared if I knew [death] was coming. Family members will come on the road with me and say: ‘Wow, your life is just like a movie!’ I’m like: ‘Yeah, a really f*cked-up movie.’ “

She claimed that the journalist set her up to say that by tweeting:

But as we know Frances Bean Cobain, was very directly affected by the death of one of the celebrities, being her father dead at age 27, as many other famous who have joined the young, dead and famous club. Frances didn’t hesitate to express her feelings: 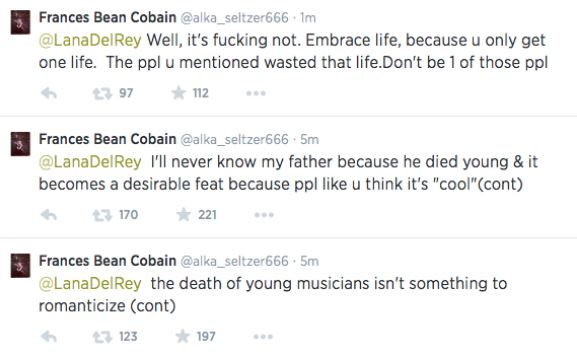 I’m not attacking anyone. I have no animosity towards Lana, I was just trying to put things in perspective from personal experience.

And we do understand France’s point of view… it is not right to go one romanticizing and glamorizing death, even more when you are a role model to millions of fans! 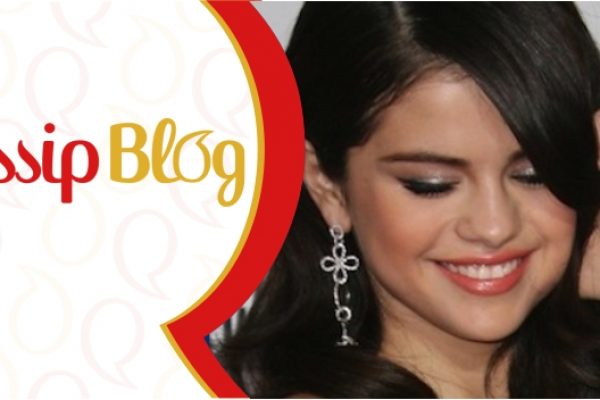 We were waiting a little bit, but the hints and the clues these two have been giving the media to start building the rumors that they are back together, Justin Bieber and Selena Gomez have flaunted more than one picture and suggestive video on their social accounts.

But this time it was Poo Bear, Jason Boyd, from Justin’s posse who posted this sweet picture, where we can see the couple, obviously a suggestive picture, but we can see it’s them

The seem very cozy and cuddly, it all seems to take place in a recording studio, rumors also say that they may be recording together. And it is that many of the fans and media people is kinda confused, since Jelena have broken up and made up again sooo many times we don’t even know if it’s LEGIT this time, BUT.. close sources to Selena say:

“She still loves him. It is hard for her to get over him because they have so much history. You just can’t drop those feelings. There is too much there.”

Whatever she’s up to we just hope that deep down inside Justin‘s bad boy behavior and beyond that pretty boy face there’s that something Selena Gomez sees in him. We only hope the lead a healthy relationship, and maybe some act cleaning from Mr. Bieber. 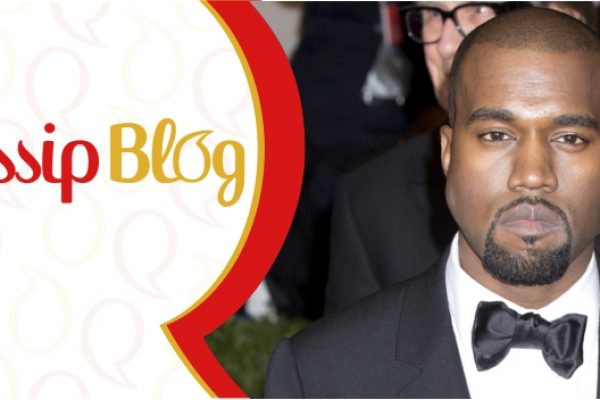 We’ve some Kanye West beef for this Friday… this time he’s going against the leader of the free world… making Kanye’s comment as special as he is.

West was on Power 106 FM last Wednesday talking about his fave subject 🙂 – Kanye West – and he couldn’t help himself when putting Obama down to get his ego up. Not being sure of what his master plan would be, but he sure wants everyone to know he has a MASTER PLAN !! He said:

“You do not want to go against the power. I’m working on one mission, and that’s a mission from God. I’m gonna make it very clear exactly what I’m here to do. I’m here to help. I’m going to apply all the blessings I’ve got.”

And then he went on saying you need to have a special power no one else but Kanye has, ( OK *rolling eyes*), he continued:

“You can’t effect change from inside the White House like that… You gotta have the money.”

So he speaks about power of change coming from God, but then he talks money? Is his God money? We’re sure it is, but putting all that asides we’re more than happy to see rich and successful celebrities wanting to help others with their “blessings”. as long as they keep EGO aside.  Newsflash Kanye, the fact you’re now Kim Kardashian’s husband doesn’t make you a Rockefeller! 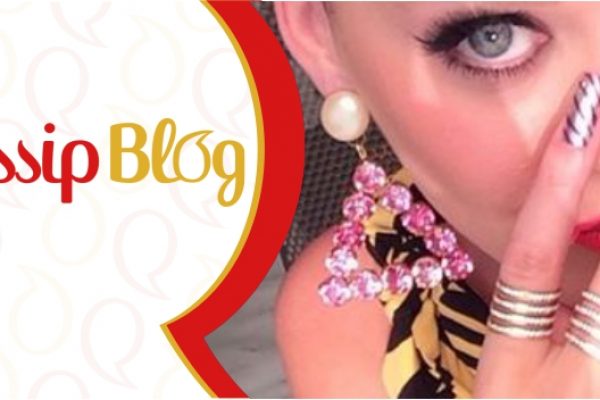 This selfie was posted by Katy Perry on her Instagram yesterday, and we have to say… we’re surprised! She has revealed her alien inspired look, that asides from what we mentioned she also rocked long metallic nails. 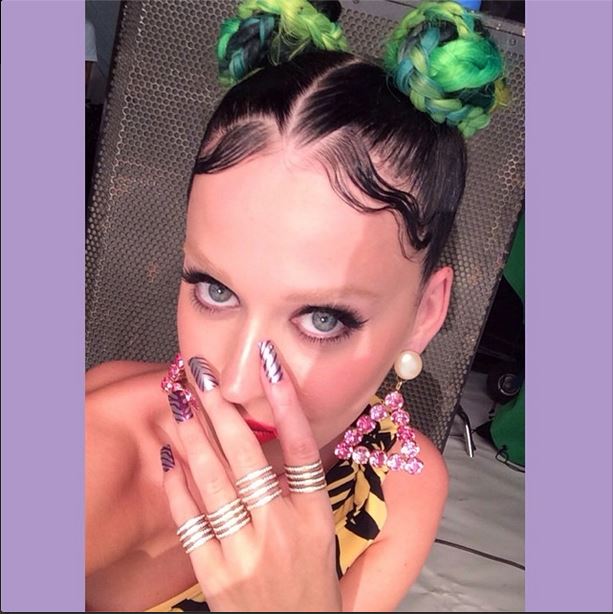 Joining the bleaching fashion along with, Miley Cyrus and Kendall Jenner, whom rocked the trend for photo shoots. We would definitely hope that this strange beauty moment is for an editorial, but thinking about the fact that Miss Purrry changes style daily for her Roar singer, we really don’t know what to expect!

She has been wearing a slime green hair for a few months already, meaning she’s definitely not concerned about taking risks!

What do you think of her new look? We seriously want to know, tell us more on Facebook or Twitter, or leave us a comment here! 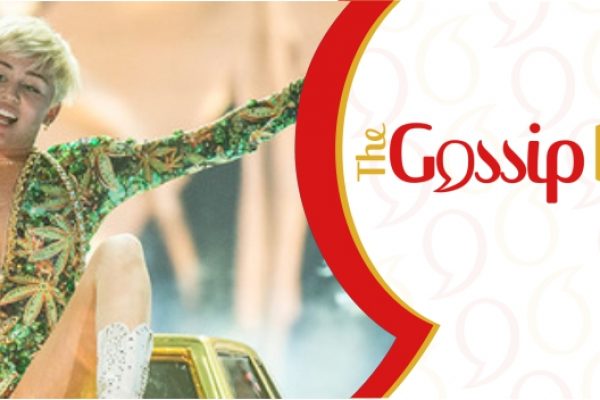 Sticking her tongue out, telling kids to smoke marijuana because it will get them laid, and acting like a stripper seems that is really NOT enough and she really CAN’T STOP!

Her last show in Madrid this week, she was pulling her suit all the way up, but not only in the back to make it look like a thong.. but she had also a crotch wedgie!! Miley Cyrus literally raped herself on stage. She even bent over to show some more skin than a table dancer… 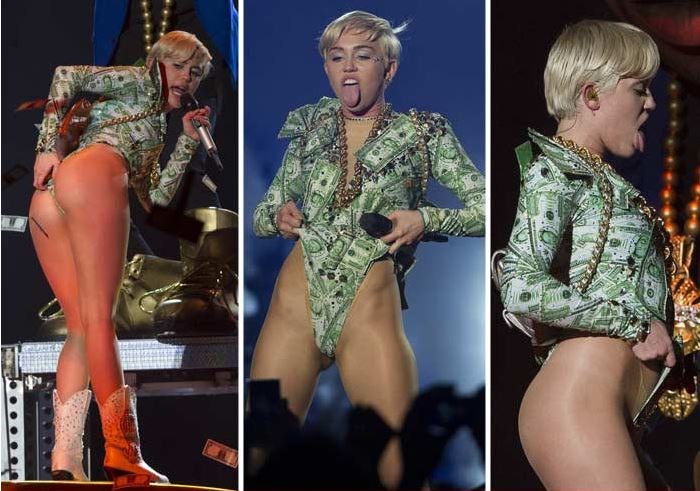 We are all sure that if her suit wouldn’t have been covered in money, the fans for sure would have thrown a few $20’s in there.

Many celebrity experts have expressed that they are all waiting for her to make her own sex tape to follow her “Ratchet” publicity stunts. And me, I personally think, that there’s OTHER ways to be famous and successful rather than using shock tactics with the audience, her voice and talent is already enough… but i am just one more in the audience, am I?

Oh Miley.. will you ever stop? 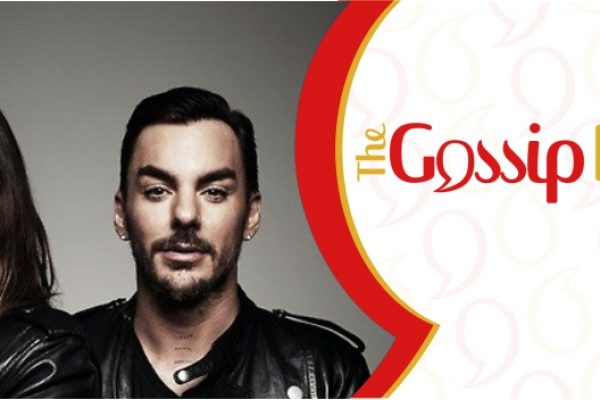 Shanon Leto, Jared’s older brother, was arrested this past Monday night charged with DUI. What it’s up with these guys and heavy drinking?

He was busted in Hollywood 7 PM after his car got stuck on Fairfax Boulevard, and the cops said that Shanon seemed to be struggling even moving around so he was taken in.

Close sources say that Shanon Leto has an incredible traffic warrant for driving without a licence, OMG!! He is still in custody, and being held on a $5,000 bail on the DUI and another $2,500 for unlicensed driving. This is definitely not a good example as a big brother Shanon! But way to go… we all have to pay our deeds! 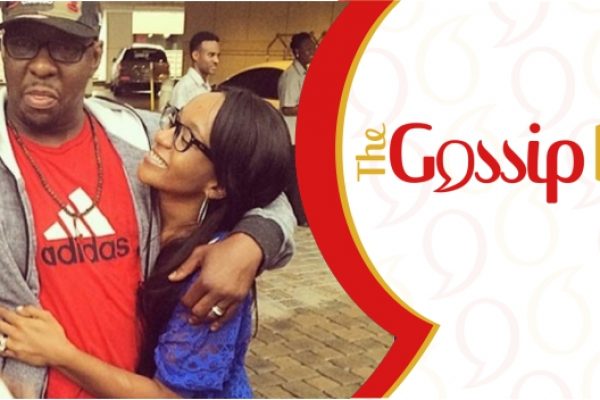 Awesome good news, Bobbi Kristina and Bobby Brown had an amazing and touching reunion for father’s day this year. Bobbi posted some pictures on her Instagram of the moment! 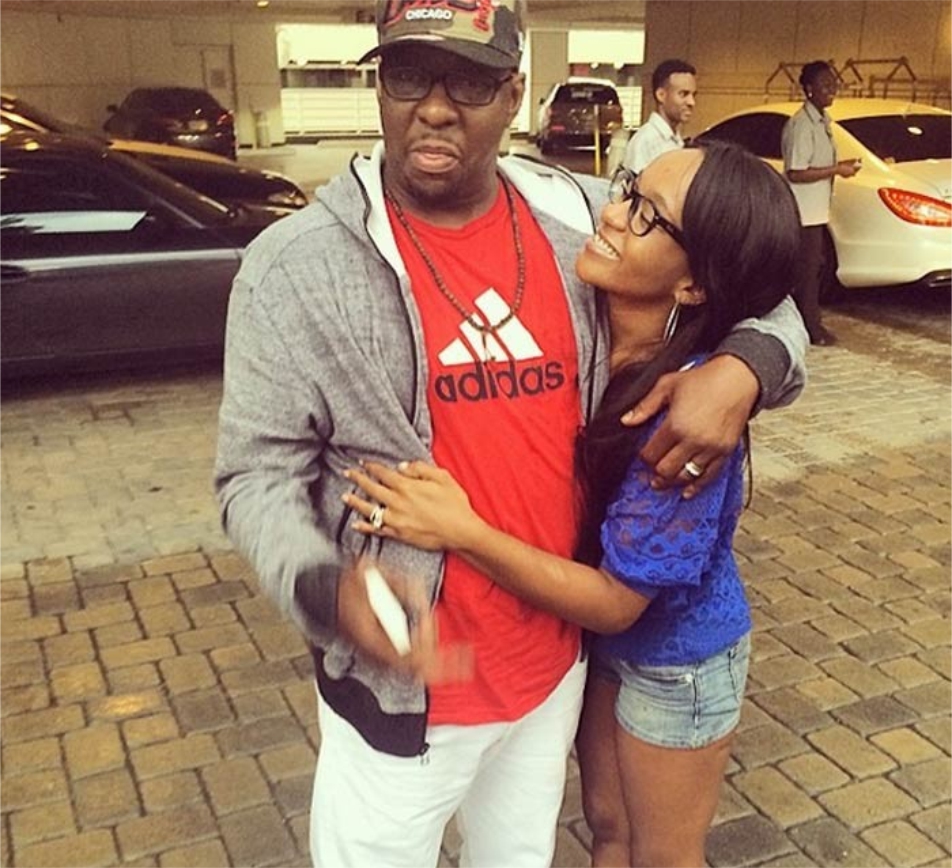 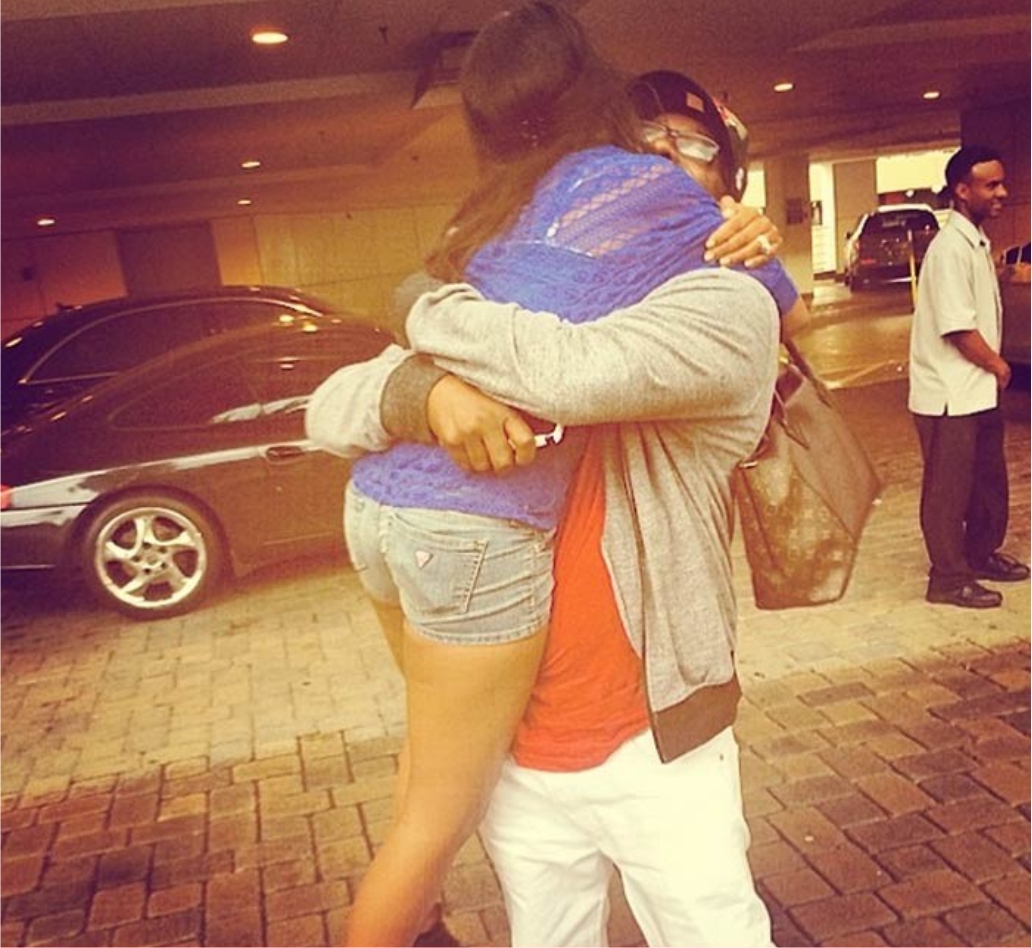 They were both smiling and seemed very happy, she wrote : ” My face says it all. I love you daddy.”

They hadn’t seen each other after Whitney Houston‘s death almost 2 and half years ago, seems they figured out a way to put their differences aside, and we’re glad!!

Stay tuned with The Gossip Blog – Your daily dose of news and celebrity gossip! 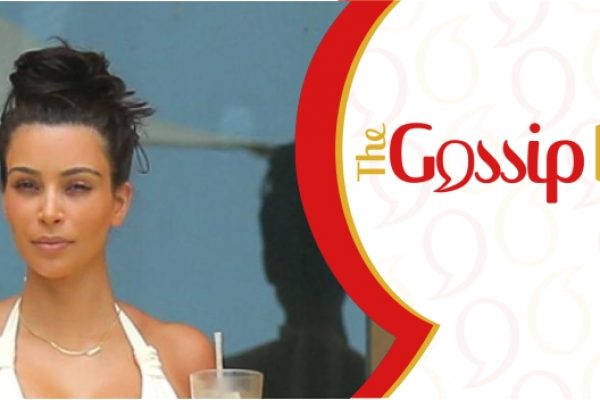 Kanye must be in heaven! Kim Kardashian gave her new husband the best of the best for his birthday last Tuesday in Mexico with her well geared best weapons… If  you still don’t know what we’re talking about here it is:

And even if Kanye West‘s birthday was back in June 8th, they are still partying like rock stars in their Mexican vacations, they are staying at Joe Francis’s Casa Armana in Punta Mita. 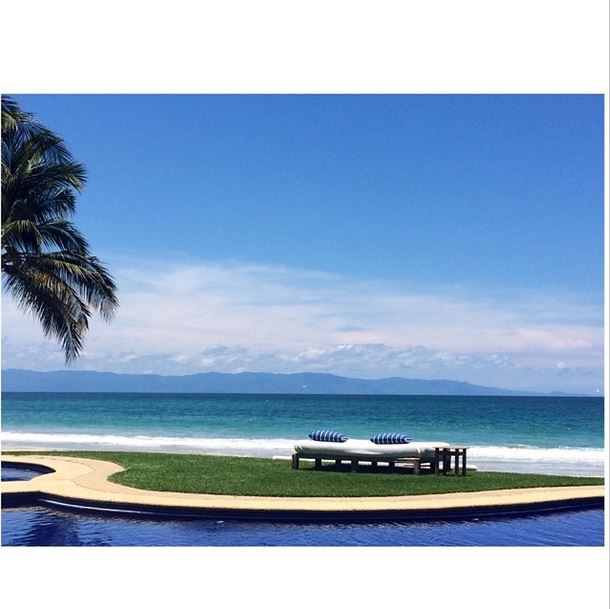 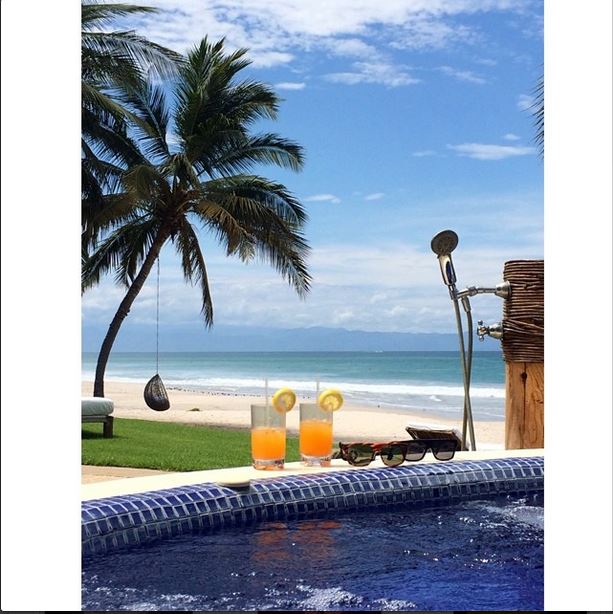 The two pieces used by the socialite to tease Kanye is a $257 Tara Mathew’s Ajaccio bikini, she also posted some pictures on her Instagram of her POV ( The ones above are hers too). Check out her super flat abs! 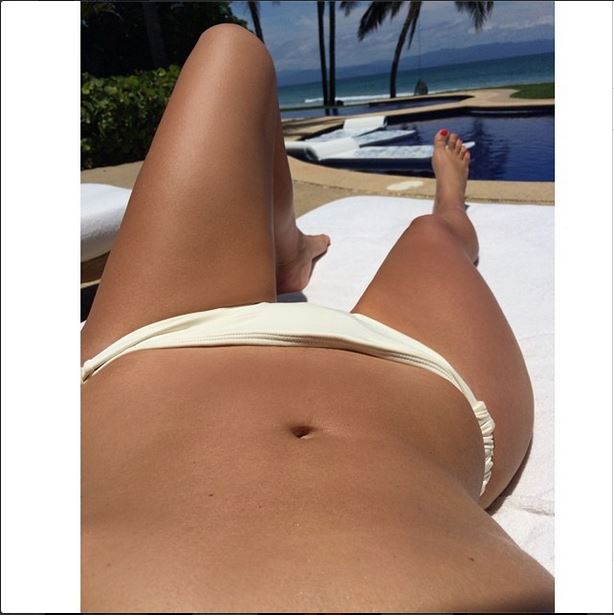 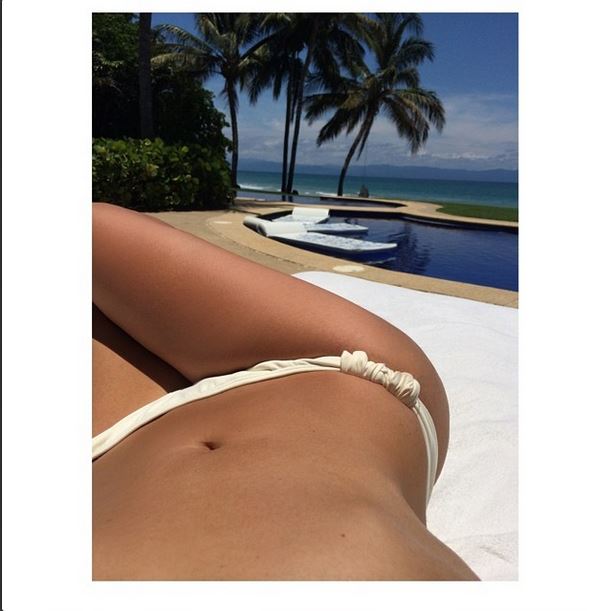 Kim is definitely doing some hard work out, just look at that stunning belly… What ever she’s doing we want the secret! 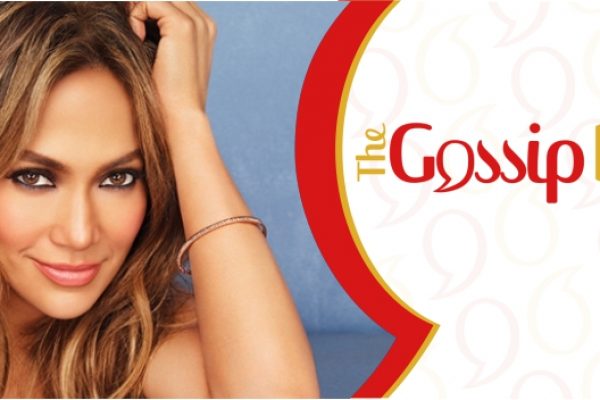 It is not big news that the pop Diva, Jennifer Lopez CAN’T be alone for two seconds, she had confessed in the past her huge fear of being alone. Soooo with this being said, after her recent break up with dance Casper Smart, she seems to already set eyes on another hottie to warm her cold bed.

The rumors point out to Maksim Chmerkovskiy, a Dancing with The Stars cast member, whom are getting very close lately, more than just friends some say. But they also tell us that they met through their friend Leah Remini, while she was in the show they worked together at the American Music Awards and stayed in touch afterwards. 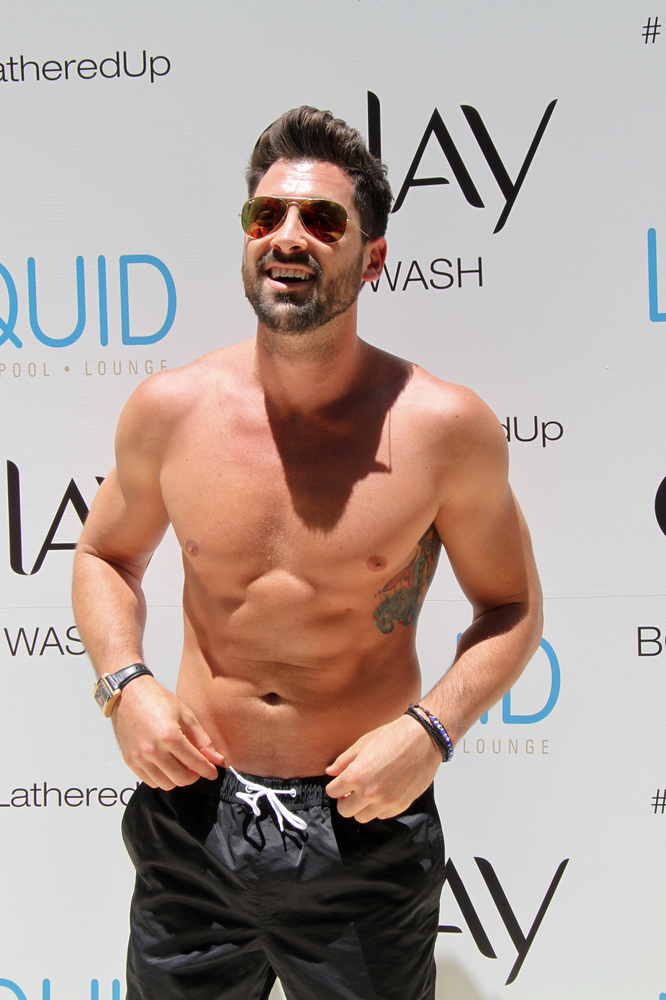 A close source commented that they may announce their relationship anytime soon, we know Jenny and her fear of being alone, but who knows? Some people are already thrilled thinking on how good those two would look on the red carpet, knowing lil’ Miss Diva Lopez.

In the mean time check out other news and stay in touch with us via Twitter or Facebook!!