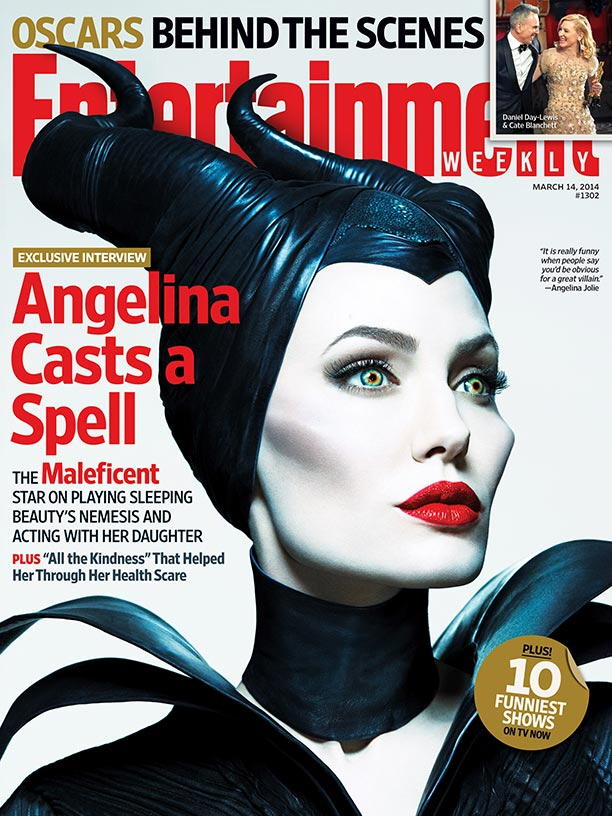 Angelina Jolie covers the new issue of Entertainment Weekly and she’s gracing the cover as Maleficent. God, she looks scary! And perfect for this role. Maleficent will be released in May, so we still have some time to wait for Jolie’s big return to the big screen, but she’s giving some teasers about what to expect from the movie in this interview.

Here’s what Angie revealed to EW!

On everyone agreeing she should play Maleficent: “It is really funny when people say you’d be obvious for a great villain.”

On how she prepared for the role: “The exercise wasn’t how can we have fun with a villain? It was: What turns people evil and vile and aggressive and cruel? What could have possibly happened to her?”

On how the support she got after the double mastectomy helped her heal: “Wherever I go, usually I run into women and we talk about health issues, women’s issues, breast cancer, ovarian cancer. I’ve talked to men about their daughters’ and wives’ health. It makes me feel closer to other people who deal with the same things and have either lost their parents or are considering surgeries or wondering about their children. I was very, very moved by all the support and kindness from so many people.”

She doesn’t want her kids to be actors: “We think it’s fun for our kids to have cameos and join us on set, but not to be actors. That’s not our goal for Brad [Pitt] and I at all. But the other 3- and 4-year-old [performers] wouldn’t come near me. It had to be a child that liked me and wasn’t afraid of my horns and my eyes and my claws. So it had to be Viv.”

Her kids didn’t want her to take the role initially: “They went, ‘She’s so scary!’ I said, ‘Let me tell you the real story but you can’t tell anybody.’ So this was my test too, like any parent.”

Pax and Zahara are also in the movie: “I had to walk by them being very mean. Of course, I wanted to stop and wink at them.”

Rumor has it the movie will reveal why Maleficent became so evil and from Angelina’s quote, I’m guessing the rumors were right. As for everyone agreeing she’s perfect for villain roles, well…they used to call her the Villaines.

I’m glad she explained why and how Vivienne got the role. When the news first broke, a lot of people were saying she scored the part out of nepotism.

Fans can also swoon over this photo of Angie and daughter Vivienne, who will be making her movie debut in Maleficent. Viv will play baby Aurora. 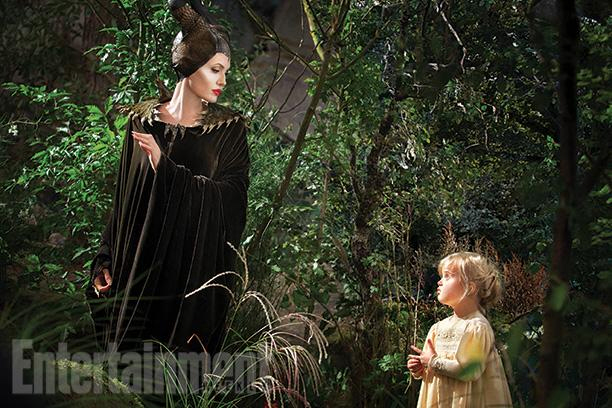 In case you somehow missed it by now, here’s the Maleficent trailer:

Do you love Angelina Jolie as Maleficent?

Are you excited for the movie?