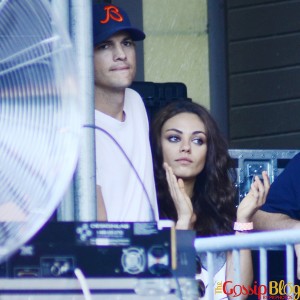 Mila Kunis and Ashton Kutcher are expecting their first child, said sources of E! News entertainment program, weeks after it was confirmed that the former co-stars of “That ’70s Show” series were planning their wedding. Now it has been reported that both would be parents.

According to the report, Mila Kunis had been seen attending a prenatal yoga class in a center located in an exclusive Hollywood area. A little over 3 months ago a picture of Mila raised suspicion that the actress was pregnant, but then it was dismissed.

It’s pretty ironic that the interpreter announced a few days ago she had signed a contract with the whiskey brand Jim Beam since for her pregnancy, she will have to be away from everything that has to do with alcohol.

Now we just need the happy couple to let us know the exact date when they will celebrate their wedding, the details, the dress, the guests and where the honeymoon will take place.