We were just waiting for this moment, and now that it is here we’re more than glad to report it! Lupita just made her first Vogue cover and she’s ready for July this year! We must say she looks Perfect! 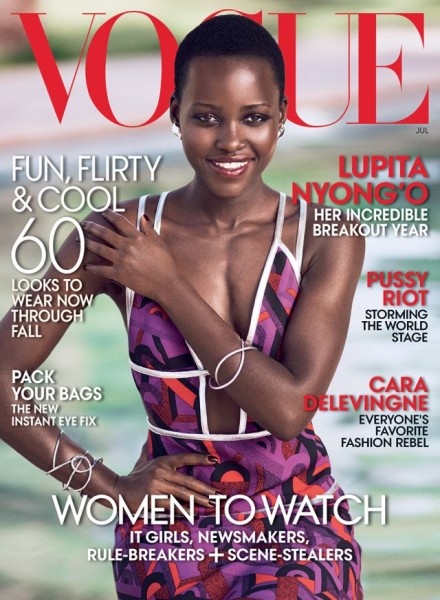 The actress is wearing a colorful Prada dress on the cover, perfect for summer time! But the spread… even more color filled! She poses in a bazaar and a spa in Marrakech. Lupita even dares danger and faces a cobra in one of the pictures!

We also love the one on the tub, with all the rose petals and the one in the couch were she’s dressed in warm colors. Nyong’o spoke about always having some love for fashion in an interview, saying that she even designed her own prom dress! This is what she had to say:

“It was a velvet miniskirt with a matching little top and an iridescent silver translucent fabric that flowed to the ground. It was kind of ridiculous, but it was fabulous at the time.”

Lupita expressed also how tiring this job can be saying:

And continues saying that choosing a dress for her sometimes is more of an instinct more than anything :

“For the bigger awards, the dress let me know it was going to be worn. It’s quite scary when you fall in love with a dress, because it’s nothing to do with your brain. It’s like a gut reaction. Nothing can prepare you for awards season. The red carpet feels like a war zone, except you cannot fly or fight; you just have to stand there and take it.”

Well dear Lupita you’ve got this warzone covered! Nothing to worry about!

Tell us your thoughts on this awesome vogue spread. We want to hear from you via Twitter or Facebook!